Eighth grade!  Wow!  Eight grade!  I cannot believe that our homeschooling journey began six years ago, and that we made it this far.  My oldest child began homeschooling in the third grade after a less than good experience in traditional school.  I was a nervous wreck about pulling him out of school and taking on the responsibility of teaching him.  Looking back, I am so glad that I did.

These two met in kindergarten and have homeschooled together through the 6 years! All grown up!

When I pulled my kids from school, I had many ideas in my head for what I wanted to do over the next years.  One of my ideas was an eighth grade project.  When I mentioned this to my son last summer, he was ecstatic.  He came up with enormous projects-rebuilding a car, rebuilding a sail boat, building a bouldering wall in his room,….the list went on and on.  Obviously, these projects were slightly larger than what I had in mind.

We came to  a compromise.  At fourteen, people can get their boaters licence here in North Carolina.  He decided to take the class to get his boaters licence and to work on his grandfather’s fishing boat to get it up and running.

His grandfather brought the boat up in the fall.  Sims worked on the trolling motor first.  Before the age of fourteen, a person can only operate a motor that is less than 10 horse power on the lake; so the trolling motor was perfect.  He and his buddies putted around the lake at a very slow speed!

One long boat ride with the trolling motor!

Right before his fourteenth birthday, Sims completed the boater’s course, which consisted of 6 sections that had to be passed and a final exam.  Passing the course meant that he could now take the boat out and use the actual engine.  He was ecstatic.

He and his friend took the boat out.  It made it about 200 feet before it stopped.  LOL!  They paddled in and then the engine work began.  Since that time, he has also built a platform inside the boat so that they have more room to stand and fish.  Overall, I think his project was a definite success.  I also think it will be a project that he will keep learning from over the next few years!

Putting the boat in for the first REAL adventure! 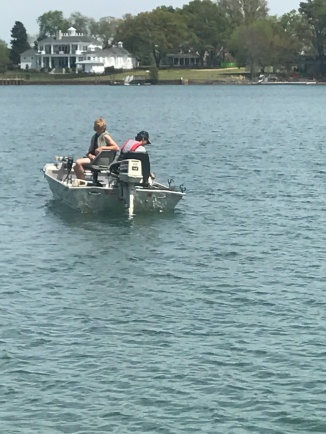 This about when I heard the engine stop.

Working on the platform.

One thought on “Grade 8 Project”