Parks’ third block started off by looking at the three parts of the body-the head, the body and the limbs.  He went over all of the activities that he can use his hands for and how he is different than other animals.  Over the next three weeks, he learned about three different animals that are all native to NC: the shark, the box turtle, and the opossum.

Books for the block

After some discussion, we decided to start studying Ancient Rome through a story.  We read through the book, “Our Roman Cousin from Long Ago,” and researched many of the ideas discussed throughout the story.  We have read this book once before, and everyone was excited to read it again. 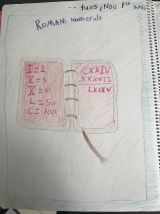 Masks of the ancestors 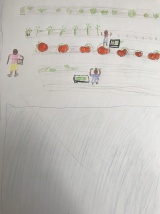 Life on the Farm

The prep work for her paragraph

Sims’ third block on Civics was purposely timed in November to go along with the elections.  We used the Oak Meadow Civics book, lots of websites and a lot of discussion throughout the block.  Sims went over the key values in the US, laws that affect his life, the Preamble to Constitution, the Constitution, Federalists and Anti-federalists, and the Bill of Rights. 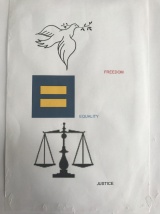 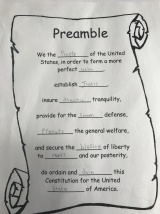 The Bill of Rights with an image

A Poem on his freedom in the US

Now we are onto a short block on North American Geography and Cursive!