The new work plan…my ah ha moment..did it work or not work?  Well, I guess that is still up in the air.  We did one week with the new work plan.  It went well and the kids did do work on their own which freed me up to give lessons.  However, they revolted again.  I guess I still put too much work on the work plan.  The nice part is that even though they revolted, they did finish their work.  They even had their first round of tests.  Not too bad. 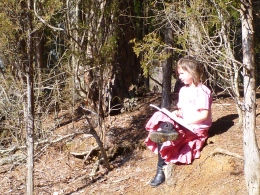 We have been very lucky to find the Nature Center at Latta Plantation.  They offer quite a few classes, and they are awesome!  This week the kids did outdoor cooking and Biology.  On Tuesday, we hung out at Latta Plantation and did our math.  The kids had a lesson on lines and angles.  Then they took the camera and found acute, right and obtuse angles all around the park in the trees.  The kids were very inventive with their angles.  On Thursday, they put their pictures into a book with definitions and pictures.  Although they both griped through the project, they both loved the end result.  Then Friday, Sims had his biology class.  This week they learned about the life-cycle of a frog.  The exciting part is that we now get to care for and watch a tadpole morph into a frog.  So far, it is pretty neat and brings back fond memories of my brother and I doing this as kids.

For this week, I decided since the kids are revolting like crazy with my routine that they could have a project week.  They still have to do their journal/nature study and reading each day.  They also both asked to have spelling (this encourages me because as much as they griped about it last week, they did not want to stop it this week).  They each came up with a project based upon their Social Studies work.  Sims made Jamestown out of legos and wrote a paper on it, and Sawyer is making a book about symbols that make her think of the United States (she chose the flag, a peace symbol and the president).

Wednesday, we got back to nature and went to Latta Plantation for an animal classification class and some hiking.  The kids actually sat for 10 minutes in silence as they listened and watched nature around them.  It was amazing.  Another fun part of the day was comparing how different my two children are.  Sims is hiking all through the forest, climbing trees and exploring everything.  Sawyer stays on the path, writes about the trees and sits to read a book under a tree.  Two completely different kids-and I wonder why I get frustrated?  They learn completely different from each other.

Thursday the kiddos buckled down and worked non-stop!  I barely even heard from them except for when they asked for lessons or for help on their projects.  A friend of ours who has a child in Parks’ class asked if Sims and Sawyer would like to take part in a fondue lesson for Parks’ class.  Thus, this was part of the kids’ day on Thursday also.  They made a menu and rules for fondue.  They were very excited on Friday to participate in the lesson.

Today was a terrific day!  The kids started the day with their spelling and math tests.  Then they went in and did their fondue lesson.  The lesson was delicious!  Sims and Sawyer were a huge help.  Sawyer gave lessons on strawberry cutting, and Sims was in charge of the banana cutting.  Then they both helped the children with serving the fondue.  It was a big day that did not end there!  They both put the finishing touches on their social studies projects and presented them to my dad and to Nick.  They were both very proud of their works.

So now onto the plan for next week.  Obviously we can not do projects each week but I am keeping their enthusiasm about the projects in mind as I look toward the following weeks.

3 thoughts on “Getting into a groove…or not?”